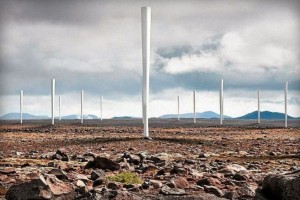 Looking somewhat like a giant reed gently swaying in the wind, the new Vortex bladeless wind-driven generator prototype produces electricity with very few moving parts, on a very small footprint, and in almost complete silence. Designed to reduce the visual and aural impact of traditional spinning-blade turbines, this new device takes advantage of the power contained in swirling vortices of air.

Many opponents of spinning wind turbines point to their supposed danger to birds and other flying animals, as well as their rather noisy operation and – particularly in commercial installations – their enormous size. Though these may well be excuses by those who prefer to stay with older electricity generating technologies that they know and trust, standard wind-driven turbines do have these issues and this tends to hold back their universal acceptance and use.

This is where the creators of the Vortex bladeless believe that their device has the advantage. A relatively compact unit, it relies on the oscillation of its reed-like mast in reaction to air vortices to move a series of magnets located in the joint near its base to generate electricity.

Though obviously not as efficient as a high-speed, directly wind-driven turbine, this is offset by the fact that the Vortex has fewer moving parts and is, according to the creators, up to 80 percent more cost effective to maintain. Coupled to the notion that it supposedly has a greater than 50 percent manufacturing cost advantage and a 40 percent reduction in its carbon footprint compared to standard wind turbines, the system also seems to offer direct economic advantages.

We’ve explored a number of bladeless wind-turbines before – the Solar Aero turbine being one (though, by definition, not really bladeless as it merely covered the spinning blades with a housing) and the Saphonian being another. The latter being more of a true bladeless “turbine,” it still required hydraulic actuation of pistons to generate electricity, so its efficiency was probably not all that great (and, to be perfectly frank, it was not strictly a turbine either as it had no spinning parts).

The Vortex, on the other hand, is purported to take advantage of the swirling motion of wind and not direct force like the aforementioned units. This means that it can generate energy from the repeating pattern of vortices (known as the Kármán vortex street), which are generated as the air separates to pass by a blunt body, such as the Vortex structure itself.

This also means that groups of Vortex units can be huddled closer together as the disruption of air movement in the wind stream is nowhere near as critical as it is when positioning standard, blade-driven wind turbines. This will also help ameliorate the inherent efficiencies in each unit as they can be grouped much closer together than their standard turbine counterparts and, therefore, potentially generate more power per square meter.

The first model to be made available commercially will be known as the Mini: a 4 kW, 12.5 meter (41 ft) high unit intended for residential and small-scale commercial application. A larger model, dubbed the Gran, is also being designed and is a unit with a greater than one-megawatt output intended for use in large-scale power generation for industry and electricity companies.

To get their creations to production, the team at Vortex will be launching a crowd funding campaign on June 1, with details to become available via email alerts on the company’s website.

The short video below shows a Vortex prototype in action and provides some background information from its creators.